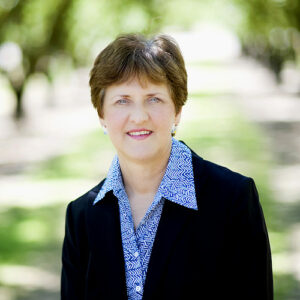 “At my very first job – as a Food Technologist for Lipton/Unilever Canada – my boss was a Mac grad,” recalls Lapsley. “And in my last position, as Chief Scientific Officer for the Almond Board of California, I collaborated with the head of the Canadian Food Inspection Agency (CFIA), who was also a Mac grad.”

Now retired, her studies at Mac “provided the foundation for my career,” says Lapsley. “I believe in the Faculty of Agricultural and Environmental Sciences, and I believe it can make important contributions to society for the future.”

After Mac, Lapsley went on to earn a Master’s and a doctorate in Food Science. Her career took off at Agriculture and Agri-Food Canada, where she became a Director of Food Research. She then relocated to California’s Central Valley, where 80 per cent of the world’s almonds are grown, and spent over twenty years with the Almond Board of California.

“When I started, there wasn’t much research on almonds.” She elevated the level of scientific research overseen by the almond industry, tackling major challenges such as nutrition and food safety. When she arrived there were two published research papers on the health benefits of almonds; when she retired, there were 185. “I brought sound science and research rigour to the table, and that’s an achievement I’m proud of.”

Although the Central Valley is a long way from Mac Campus in Sainte-Anne-de-Bellevue, the food science industry “is not as big a world as you might think.” She’s maintained ties with Mac throughout her career, meeting fellow grads at conferences and seeing McGill students compete in international undergraduate competitions – “and they do very well.”

That’s why Mac was top of mind when it came time for Lapsley and her husband John to discuss estate planning. Because her career was split between Canada and the States, they needed a will in both countries. “I thought, ‘What am I going to do on the Canadian side? Give it back to Mac.’”

Not only is Lapsley leaving a legacy gift to AES, she is the Faculty’s ambassador for the 200 for 200 Legacy Challenge, which aims to secure 200 legacy gifts for McGill’s 200th anniversary.

“I’ve seen how far the Faculty has come, and how it’s evolved. Mac is doing an excellent job, and I believe that supporting its students and endeavours is a worthwhile cause.”