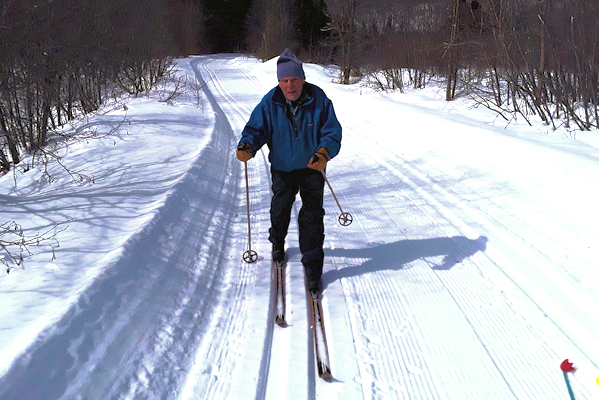 Here I am on part of the original trail—with tracks made by big machinery now.

Spring Skiing with Art Abbey, BScAgr’51—back in the day that was cross-country skiing!

It was a beautiful day so I went for a ski at Kenauk Nature, which is a large nature area north of Montebello, Quebec. It brought back many fond memories. As part of Expo 67 celebrations a group of enthusiastic cross-country skiers decided to put on the Canadian Ski Marathon in 1968. It was a 100-mile ski: Lachute to Montebello the first day, Montebello to Buckingham the second day; five ten-mile sections each day. Since the trail went across some of my farmland, after crossing the Rouge River bridge, I joined the group and was given the responsibility of making the part of the trail from the Rouge to Kenauk, which was section four of the first day. Kids from Sedbergh School, a private school situated on 650 acres north of Montebello, marked the trail from Kenauk to Montebello, which was section five.

With the help of some friends, we cleared a trail in the fall. On the first day of the marathon, I had to ski the trail to make a track since there were very few markers and, of course, there was no machinery in those days! I did that for the first three years of the marathon, and after a few years I managed, with great difficulty, to do the hundred miles.

The Canadian Ski Marathon is the longest ski event in the world. It has taken place on the first or second weekend of February every year since 1968, with anywhere from three to five thousand people of all ages participating. They come from all over Canada, the US and even Europe, most doing one, two or three sections each day. Although it is intended as a ski tour, there are a few skiers every year who actually RACE the fifty miles each day!