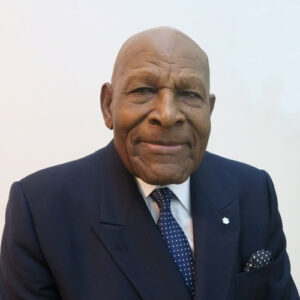 B. Denham Jolly, C.M., BSc(Agr)’60 is a human rights activist; author of In the Black: My Life (2017); Toronto Book Award Winner; Founder of FLOW 93.5 FM, Toronto; the Harry Jerome Awards; the Black Business and Professional Association (BBPA), and Co-Founder & President of the Committee for Due Process. He was recently awarded the Order of Canada.

Congratulations on receiving the Order of Canada, one of Canada’s highest civilian honours, for your contributions to the promotion of equality and opportunity within the Greater Toronto Area’s Black Community. Please tell us about some of the community outreach, professional organizations and philanthropic support for which you have been recognized, and what does this honour mean to you?

Receiving the Order of Canada has been very humbling and it is a profound honour to be recognized by such a great country as Canada. Even though one does not expect rewards for their empathetic actions, it is satisfying to know that good deeds are not always unnoticed in society–[for example] paying off the mortgage for the Jamaica Canadian Association’s centre (JCA), starting a breakfast program for 60 students at my old high school, sponsoring a youth soccer club in Regent Park, Toronto, for underprivileged boys, or giving scholarships to various institutions. I have also served on a number of institutional boards, including the Toronto International Film Festival (TIFF), the YMCA of Greater Toronto, the Black Action Defence Committee (BADC), Caribana (North America’s largest outdoor cultural festival), the Toronto Mayor’s Economic Development Committee and others.

I founded the Black Business and Professional Association (BBPA) 38 years ago and the Harry Jerome Awards, Canada’s most prestigious Black award, which in 2020 awarded over 100 scholarships to institutions of higher learning and has, so far, awarded millions of dollars in scholarships over the years. Of this I am very proud, having contributed to filling a real gap in the Black Community, considering there were still 1,500 unfulfilled applications this year. Other honours received include the Queen’s Golden Jubilee Medal, the Queen’s Diamond Jubilee Medal and Canada’s 125th Anniversary of Confederation Medal. In 2019 the City of Toronto recognized me by naming a city street in my honour: “Jolly Way,” for my activism and philanthropic contributions.

How did you end up at McGill? Was it always your aspiration to study at Macdonald College? What role do you think universities such as McGill need to play in society today? Is it about teaching the next generation, fostering innovative research, building bridges to society through public outreach… or all three?

I arrived from Jamaica to attend the University of Guelph with the intention of obtaining a degree in agriculture. This led to further studies at Dalhousie University and finally McGill, where I graduated with a degree in science in 1960.

McGill/Macdonald is universally recognized as a most prestigious institution. The role of McGill is all three, as it plays an important role in research, building bridges to society and especially, extending opportunities to the less privileged, which is a very important role given that student costs have exploded exponentially compared to the past, when government contributed more to education. In fact, this is one reason why I have always made an effort to contribute generously to McGill/Macdonald.

What role has your McGill/Macdonald education and experience played in your business success? Are there any one or two things you can point to now as triggers that helped you on your way to your successful career?

Having a degree from such a prestigious institution as McGill opens doors to various opportunities. It being regarded as the “Harvard of the North” has opened doors and commanded respect both in the academic and business worlds. Not being a privileged student, I learned resilience and determination; making sacrifices to succeed was great equipment for forging a path for life after university.

You also wrote a book, “In the Black: My Life” that won the Toronto Book Award in 2017. This memoir speaks to the “polite” racism experienced in Canada. Do you think the current situation with the Black Lives Matter movement is making a difference?

It is quite propitious that my book “In the Black,” which was written in 2017, prophesied the situation that Black Lives Matter is so vigorously, appropriately and comprehensively addressing today. One invaluable effect of what Black Lives Matter is doing today is forcing dialogue, and hopefully creating greater understanding, because it is only with empathy that there can be any meeting of the minds.

If you could offer one piece of advice to younger alumni, what would it be?

The best advice for a young student today would be to maintain a tenacity of purpose and patience. There is a strong tendency today, with the present generation, to expect instant results. One has to have the strong attitude of the marathon runner, and sometimes even after “hitting the wall” have faith in the second wind or even the third.