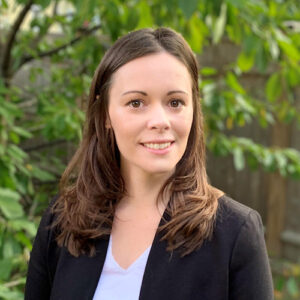 Hamilton Bennett played an instrumental role in the development of a COVID-19 vaccine that made headlines around the world. She says her days as a student at Mac helped prepare her for the most memorable year of her life.

The name Hamilton Bennett might not immediately ring any bells for you, but you’re certainly familiar with the project that she has been devoting long hours to for the past year. As the senior director for vaccine access and partnerships at Moderna, Bennett, BSc(FSc)’07, has been overseeing the development of the company’s COVID-19 vaccine. Moderna has pledged to produce at least 600 million doses of the vaccine for worldwide distribution before the end of this year.

2020 was a year like no other for Bennett, as Moderna and other biotech firms worked frantically to develop and test COVID vaccines at an urgent pace never seen before. Ask her if any one moment stands out and she’ll point to a meeting last November that involved Moderna representatives and the members of an independent data safety monitoring board (DSMB) that scrutinized the results of the phase three clinical trials for Moderna’s COVID vaccine.

“For Moderna and our collaborators, the data was double-blinded – we didn’t know who received vaccines and who received placebos,” explains Bennett. “The DSMB gets to look at that data unblinded. They [went] through a closed session to review the data and then they invited us back to give us the results. After spending 11 months on this, to hear the DSMB say we’re pleased to inform you that your product has an efficacy rate of greater than 94 per cent, that was a pretty big moment for all of us on the call. I started to cry. I had to turn off the camera on my computer a couple of times. Because that’s what all our work was leading up to – did we develop a vaccine that was going to help people?”

Bennett was born in Kentucky and moved to New Hampshire as an adolescent. “I was slowly making my way toward McGill,” she jokes. She recently spoke to us about her experiences at Macdonald Campus and McGill. It’s safe to say that the University left a lasting mark on her. Her very first tattoo was a martlet.

What was it about McGill’s Food Science and Agricultural Chemistry programs that drew you to study here?

Oh, boy (laughs). You may not like this answer! It was entirely a fluke in the paperwork.

As an international student going into the sciences, I had to complete my U0 coursework in my first year to level up to all the Quebec students. When I got my acceptance letter from McGill, I saw that it was from Macdonald Campus and the Department of Food Science and Agricultural Chemistry. I called them up and said, “What is this? I didn’t apply to this program.” I had applied to biochemistry, anatomy, physiology – all of the things that I thought would set me up to be pre-med.

The person I spoke to said, “Well, your standard coursework is all the same for that first year. You have to take the same eight classes regardless of where you are, so why not come to Macdonald and after that first year, you can transfer out if you want to.”

I had an incredible food science professor that first year, Ashraf Ismail. He took me under his wing and gave me a job in his lab. He told me, “I think you’re probably going to want to stay here at the end of your first year.” And he was right.

Macdonald was a place where you could have one-on-one relationships with your professors. It is a small community and it’s an incredibly diverse community.

When you’re young and you’re in college, you’re very idealistic. You want to save the world. I never really lost that, because I was always around people who were so engaged. A lot of the students in nutrition and dietetics were really interested in Indigenous health issues and equity. The people who were studying plant science and agriculture were very environmentally focused. It was very easy to be inspired by the people you were spending your days with.

I ended up graduating with a degree in food science after knowing zero about it going in. I wouldn’t have done anything differently.

Were you involved in any extracurricular activities at Mac?

A lot of my time outside of classes was spent in student government. I was on the student council at Mac and then I sat on McGill’s board of governors as a student representative for Macdonald Campus.

Dick Pound was the chair back then and to a tee, the governors were all so nice. They wanted to know what student life was like and they were all so interested in talking to me about my studies. At some point, they put me on the finance subcommittee, and I remember thinking, man, I am out of my depth (laughs). I had the privilege of punching above my weight. And now, years later, here I am overseeing a multibillion-dollar program.

How would you say your experiences at McGill helped inspire your career path?

One of the final classes that I took at Mac was a water sanitation and health course taught by Professor Geary from the Institute of Parasitology. That really served as a kind of catalyst for broadening my horizons and seeing the path that research could take. It made me realize that medical school wasn’t the only path for doing the kind of work I wanted to do in the world. That experience led directly to doing my master’s degree in environmental health at the University of Washington, where I focused on water quality.

And then, being in Seattle, in Washington, I was exposed to organizations like PATH and the Gates Foundation, and I really understood how this kind of global health philanthropy needed to partner with scientists in order to develop innovations that are supportable in the real world. And so, when I finished my master’s, I started to look for jobs that would stay focused on that. I have been working in public health development, therapeutics and vaccines for neglected diseases ever since.

If you could go back in time and give the younger version of yourself one piece of advice during that first year at McGill, what would it be?