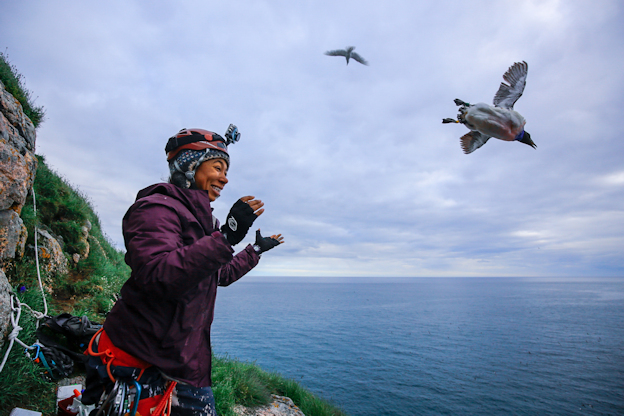 The Faculty of Agricultural and Environmental Sciences congratulates postdoctoral fellow in the Department of Natural Resource Sciences Emily Choy, who was named as a runner-up for the Principal’s Prize for Public Engagement through Media among Graduate Students and Postdoctoral Fellows.

Choy—a rising star in Arctic biology and winner of the 2020 L’Oréal-UNESCO for “Women in Science” award as the top female postdoc in Canada—has used her Twitter platform to increase the visibility and support of Black scientists.

“As a child, I didn’t see any scientists that looked like me, so I understand how important representation and diversity in science can be, especially for youth,” she explains. As such, she looked for other ways to promote her research, including becoming involved in initiatives like #BlackMammalogistsWeek, #BlackinPhysiology, and #BlackinMarineScienceWeek.”

Through her involvement with the Association of Field Ornithologists and as part of the Northern Inclusion Initiative, she has helped to promote social media campaigns that encourage diversity and inclusion in ornithology, northern research, and Antarctic field work.

She also partnered with Earth Rangers—a Canadian children’s conservation organization—to share the plight of the thick-billed murre to promote Arctic conservation. The related video was viewed over 10,000 times and the associated public engagement has helped raise awareness of the plight of Arctic wildlife, especially seabirds.

“I’ve been humbled by the support I’ve received from people around the world who were inspired by my research and pleased to see an Arctic scientist they connected with,” Choy says. “It is important for youth to see themselves represented in positive role models and important that children engage in science at an early age.”